Dowsing in a Drought

DOWSING FOR BOREHOLES DURING A DROUGHT

There have been recent reports in the news of an increase in water divining or dowsing in France as a result of the ever more frequent droughts the country is experiencing.

For centuries people have used a Y-shaped hazel branch as a means of detecting underground water.  When holding the ends in either hand and under a slight tension the hazel twig will spring up or jerk downwards when its holder walks over a water source.  Desperate French farmers are turning to established diviners to find water underground on their properties.  An experienced person can locate water and its depth and flow, eliminating the need for an expensive survey and test drilling.

Water divining is still used today by water authorities when modern technology fails to locate a missing pipe or the whereabouts of a drain.  Anything can be used as a substitute for the hazel twig such as bent coat hangers or bicycle wheel spokes.  A favourite in the last century was whalebone where two narrow strips were bound together and again held under tension between the two hands.  Today we can use brass rods which are available on the internet.

One well documented person is an American surveyor called Louis Matacia who could perform field dowsing and also map dowsing.

Louis J. Matacia was a surveyor in the USA who studied dowsing for years.  During the Vietnam War he was commissioned to teach dowsing skills to US Marines so that they could avoid booby traps, navigate safely through jungles, and learn the whereabouts of the enemy. They would draw a plan of the area and dowse over it to locate tunnels and enemy mines.  Soldiers reported that dowsing using the L-rods over ground saved many lives. Together with a range of scientific devices, Matacia was able to located lost pipes, oil, wells, caves and buried treasures.

These days people may use L-rods or a pendulum at home to find lost cats or keys or to detect which eggs will develop into female or male birds.  The variety of uses is endless. 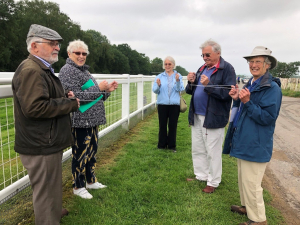 In the Radionic Association we run day courses which include dowsing with rods outside looking for energy lines or underground water, and dowsing indoors using a pendulum where we focus on health.

We also offer a 1½ hr online session on how to use the pendulum looking at such things as the nutritional value of food and how to reduce the stress in your life.